The Bruno family history can be tracked back 600 years to Avellino, in Campania, when they used to be wealthy landowners and noblemen whose fortune in time had been declining. By the time the Bruno brothers - Antonio, Gerardo, Giuseppe and Cosimo - were born in Salerno in the 50s and 60s, their parents were struggling to both manage their farm and work at restaurants. Looking to improve their fortune, the family came to America in 1976.

After years, Brunos became a modern-day, immigrant success story.Mamma Bruno always said that her children were the biggest part of her heart and a "lifetime sacrifice". When she and Papa Gaetano felt that their young sons were secure, they returned to Salerno. The four brothers worked tirelessly to learn the restaurant business while maintaining the dream of one day opening a restaurant in New York City.

In 1984, the family opened "Sistina" on 2nd Avenue and 81st street, now managed by Giuseppe Bruno. Not long after, in 1992, San Pietro opened on 18th East 54th Street. And their newest edition is called "Caravaggio"opened in 2009 at 23 East 74th Street, operated by Cosimo Bruno. 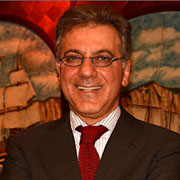 San Pietro is the award-winning, landmark restaurant in Manhattan that is renowned for the healthy, vivacious cuisine of the Amalfi Coast in southern Italy. Globe-traveling dignitaries, CEOs and celebrities find San Pietro a tantalizing way to preserve their memories of Amalfi when they return to the States.